The International Monetary Fund has underlined revisions to the growth prospects of the Australian economy. This marking an end to the economic growth that followed the 2008 financial crisis, as Australia is faced with bleak prospects in the 2020-2021 financial year. As politicians and fund managers scramble, the golden question seems to be what will spur growth not just in the short term, but into the future.

Australia is looking to leaders in Europe who have their own stimulus package coming in at $1220 billion AUD in size, which is heavily investing in energy and clean transport. This vision is supported by not only the economic benefit of job creation, but it provides a sustainable environmental solution, in what is fast proving to be a daunting threat in climate change around the world.

Leading economies seem to share this vision, although not entirely. China is approving coal-fired plants at the fastest rate since 2015, while also heavily investing in electric transportation. India is heavily invested into renewable energy and so is Japan. Australia in its own right has continued to pursue its national projects including the “200% renewable Tasmania” announcement by the Tasmanian government. While bright spots are found, there is still an abundant need for a stimulus that looks beyond the next 5 years of economic recovery.

The prospect of renewables seems to be improving for businesses and home owners. With renowned problems such as costs and efficiency being gripes of consumers in the past, the renewables market has shown a continuity of innovation over the past two decades. The improvement in engineering has pushed the efficiency of silicon solar cells closer to their theoretical maximum while improving innovations seek to maximize the sunlight the panels can be exposed to. Resulting in higher returns coming from renewable energy systems, such as solar, while being more accessible to individuals around Australia.

Solar energy increasingly has been lowering in cost as the market for the products matures and the labor required is more accessible, resulting in Australians moving from a reported 16% of all electricity generated by Solar or Wind to 40% in 2030. This being attributed to lowering costs and increased return on investment. It seems that the market for solar in particular is an enticing offering for consumers.

The question comes then of how to formulate a stimulus to drive the growth of renewable energy, to not only fight climate change, but fight the impending economic catastrophe of COVID-19. Demand from consumers and businesses present an opportunity for further incentives, while the fallout of 2020 may have a profound impact on the targets set for the next 20 years, which will have far reaching effects.

Whether we emerge from a turbulent 2020 looking towards a better future is entirely up to us, and it seems apparent that renewables, particularly solar could be the way to look when looking to drive productive economic growth. 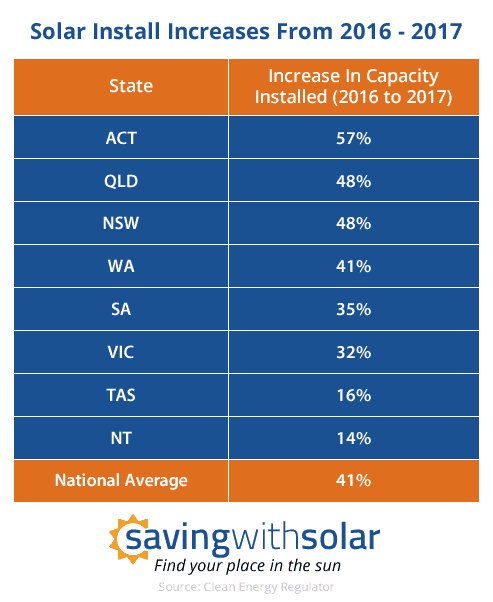 The Clean Energy Council released figures on Tuesday that show Australians’ energy needs were powered by renewables to the tune of 17.3% in 2016 – the highest since Snowy Hydro was completed 50 years ago. 3.16% of this 17.3% renewable energy was from solar power in Australia – a massive jump of 29% from 2015. According to RenewEconomy, it’s expected to grow considerably in both small and large scale solar PV production – putting us well on track to reach our Renewable Energy Targets (RET) for 2020.

Clean Energy Council Chief Executive Kane Thornton advised that 10 major wind and solar farm projects were completed in 2016 and there are 20 more in the pipeline; he’s confident that we’ll reach our RETs with time to spare.

“Every month brings new project announcements. While total investment in large-scale renewable energy was $2.56 billion last year, $5.20 billion worth of projects have secured finance in just the first five months of 2017 and have either started construction or will begin this year,” Thornton said.

“Innovation continues right across the renewable energy supply chain and new technologies such as energy storage are beginning to get their time in the sun,” he was also quoted as saying. We assume the pun was intended.

Some more takeaway statistics from the report: